Here are mechanisms for how Advanced BioStructural Correction™ can improve Multiple Sclerosis, ALS, Cerebral Palsy and other like conditions that have been ignored though show workable by neurosurgeons for over 30 years.

An explanation for lay people as well as professionals.

A Swedish neurosurgeon, Alf Breig, noted that the neurological effects of multiple sclerosis and other like conditions were based on the effect of breakdowns in skeletal structure and alignment causing tension (stretch) on the central nervous system and other parts of the nervous system. He published many papers on the separate experimental findings over the course of the 1950s, 60s, 70s and 80s. He collated the first 25 or so years of his research in the book, Adverse Mechanical Tension in the Central Nervous System in 1978. After a further decade of research confirmation and additional finding, he published the findings with the additional data and confirmation in 1989 in the book, Skull Traction and Cervical Cord Injury.

Breig’s work has been confirmed by several other neurosurgeons, Yamada1-11, Lee12 and others. Further, there is literature noting the causal link between trauma caused structural problems and MS13 as well as case studies demonstrating reduction of symptoms and lesions with structural treatment14 that has been all but ignored by the various societies looking for a chemistry answer that will never be found.

The works follow a few main points: The first is that the general theory held by Medicine, Chiropractic and other healthcare disciplines that pinching of a nerve causes reduction of nerve function is incorrect as a basic mechanism. It does occur but the reason for it is not the pinching effect. The basic mechanism behind reduction of nerve function is stretch of the nerve. Breig showed those effects in experiments over the course of 30+ years but it was Yamada especially and others who definitively demonstrated the mechanism during research on Tethered Cord Syndrome.

One can read the details in the references below. The basic data and the effects can be explained without going into the biology and chemistry. The basic point is that if nerve cells are just stretched to a certain point, with NO DAMAGE TO THE NERVE CELLS, the nerves cease to function. Lay people working to understand this section need to know the difference between Upper Motor Neuron problems and Lower Motor Neuron problems, see the box to the side.

When structure becomes misaligned and begins to breakdown, IF it does so in a way that causes the stretch of the brain, brain stem and spinal cord you will often get the production of hard lumps of tissue from the rubbing of the various tissues in the spinal cord. (These are the “sclerosis” tissues — “sclerosis” is from Greek and means hardening. Multiple Sclerosis is just a Latin term meaning many hard lumps of tissue. It is a descriptive term because the medical people have no idea how it works).

Once the sclerotic (hard) lumps of tissue are in the brain, brain stem and/or cord, they only cause problems if the cord is stretched from head to tail (buttock). Without the additional stretch from a person being stuck forward the nerves are not stretched enough to adversely affect them. This is also true of things outside the spinal cord like disc problems and bone spurs. The best way to explain this is a diagram from Breig’s book.

A few terms to understand for the caption are listed below:

Lower Motor Neuron
is a nerve cell going from the spinal cord to a muscle in the body. It will constantly fire and cause muscle contraction unless inhibited by the UMN.
When the LMN is not working there is flaccid paralysis because the LMN is not firing and the person cannot cause the muscle to contract. It is always loose (flaccid).

Taking the diagrams with the head and pons-cord tract. The one on the left is with the cord slackened. The one on the right is with the cord stretched. They demonstrate what happens when there are various space occupying lesions around or in the cord. Specifically noted in the text are an extramedullary tumor near the top of the spinal cord, some sort of intramedullary (in the cord) space occupying lesion in the middle of the cord and extramedullary lesion toward the bottom of the cord (herniated lumbar disc).

Breig notes that there is enough change in tension of the cord with flexion and extension of the head to make a large difference.

With MS the specific concern is with the intramedullary sclerotic lesions. What the middle parts of the diagrams show is the effects the sclerotic inside the cord lumps of tissue have on the nerves. On the left, with the cord slack, even with the lump of tissue the nerves function normally with no loss of function because they are not stretched, or not stretched enough, to cause problems.

On the right, with the cord tensioned, the lump of tissue increases the tension on the nerves so they stop functioning. Keeping in mind the nerves either carry sensations or control muscles. If the ones carrying sensation are affected the person feels things that are not there or experiences a loss of the ability to sense things (that are transmitted by that nerve or those nerves). If the ones controlling muscles are affected (keep in mind these are Upper Motor Neurons) there is spastic paralysis of the muscles affected.

Breig demonstrated on quite a few patients and specifically came to the conclusion that the effects of slackening the cord are the same as removing the lesions (better actually because no associated damage due to the surgery).

Looking at this patient before and after her first treatment with the Advanced BioStructural Correction™ protocol you can see that the length of the cord is reduced with structural correction.

Watching the videos below you can see the vast improvement in function that comes with structural correction that actually works.

The point is that a body with its structure corrected stays upright with little muscular effort and provides for a more optimum spinal length and less to no tension on the cord and brainstem.

That is what the Advanced BioStructural Correction™ protocol does and that is why the effects on any neurologic condition improves.

How much any one body’s condition can or will improve depends upon its structural condition when treatment it started.

Read testimonials as to the effects of Advanced BioStructural Correction™ protocol with MS.

Title says it all. Note the left hand goes slack post first treatment. Spastic paralysis is an upper motor neuron problem and these are almost always handed with ABC™ treatment. 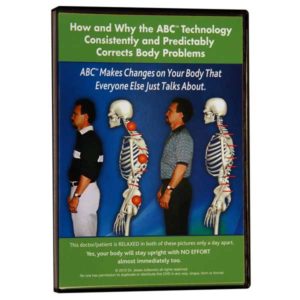